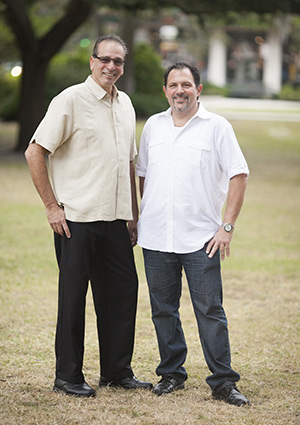 Was born and raised in New York His first food service job was at Long John Silvers frying fish and chips. He attended F.I.U in Miami and received a Bachelors degree in Hotel and Restaurant mgmt. Hired by Marriott out of college Michael worked in New Orleans, Dallas Texas, Hawaii and Upstate New York before settling in Orlando in 1987. He was previously employed as a Food and Beverage Director at several hotels and was at the  the Delta Orlando Resort when he decided the corporate world was not for him and has owned and operated Pannullo's since March 8th 1993.

Was born and raised in Long Island, New York where he was first introduced by his Italian Grandmother (Nonna) to what would later be his lifelong passion of cooking.  During his high school years, he worked at Dalisa Pizzeria where he developed his knowledge of customer service and the importance of quality food. He went on to attend Johnson Wales University where he graduated in 1986, shortly after he relocated to Orlando, Florida where he was employed by Park Suites Hotels, and Delta Orlando Resort as an Executive Chef. With the combined experience and desire to introduce his Italian recipes he later opened up Pannullo’s with his business partner Michael Schwartz. For the past 27 years his passion for cooking has been a staple amongst the Winter Park, Florida area.

JOIN US for HAPPY HOUR

The Best Happy Hour in Town

with Purchase of a Pitcher of Sangria